Andaman Islands and the Western Ghats - Background and Day 1

Background
I had never really had any major inclinations to visit the Andaman Islands or the Western Ghats but when Ian Merrill contacted me and asked if I was interested, always one for a birding trip if time and wife permit, I enthusiastically agreed. So having scanned the gen the standout birds for me were probably going to be Black-and-Orange Flycatcher and a good number of Owl and Nightjar species. There were a potential 110 or so ticks for me but I thought that if I got 90 - 100  ticks that would be good going.

The Andaman Islands are an archipelago of islands located in the Bay of Bengal belonging to India although closer to Myanmar. The Adaman Islands are the summits of a submarine mountain range which extends to the south and east to form the Nicobar Islands. The capital of the Andaman Islands is Port Blair and around 350,000 people live on the island group. The highest point is Saddle Peak at 732m. HBW Alive currently recognises 19 endemic species from the islands with a further four (Barn Owl, Oriental Scops-owl, Plain Flowerpecker and Long-tailed Parakeet) as potential future splits.

The Western Ghats are a mountain range in south-west India running parallel to the west coastline, with Anamudi the highest peak at 2,695 m. The range starts near the border of Gujarat and Maharashtra in the north and runs approximately 1,600 km south through the states of Maharashtra, Goa, Karnataka, Kerala and Tamil Nadu ending at Swamithoppe, near Kanyakumari, at the southern tip of India. The mountain chain is designated as a UNESCO World Heritage Site and has been identified as one of the most biodiverse regions of the World. HBW Alive currently recognise around 25 endemic species from the region. There are, in addition, at least another five well defined subspecies that may be split in the future and these were also high on our list of priorities to see.

The taxonomy that we generally adopted during the trip was that of HBW Alive. Based on current HBW Alive taxonomy we had the potential to see all of the endemic birds of the Andaman Islands and the Western Ghats with the following exceptions;


Logistics
The entire trip was booked through Kalypso Adventures. I had little involvement in the itinerary, this was mainly done by Ian, but the brief was that we basically wanted to see as many of the endemics as possible! Kalypso were very responsive and the trip was very well planned with just the right amount of time to see all the birds at each of the sites.

At the very outset we had requested that Kalypso provided the services of Jijo Matthew as our bird guide. Jijo was recommend by Bird Tour Asia and he proved to be an exceptional guide. He has a thorough knowledge of the birds (although he freely admits waders are not his strong point and that he prefers the forest birds) and is a great character to spend the birding day with. He knows the birds and the sites well and is well connected to ‘scouts’ working separately to locate some of the trickier species, particularly some of the night birds. He is the ‘go-to’ guide for the Andaman Islands and the Western Ghats and probably a large part of southern India. If you are planning a similar trip to this then Jijo is the guide for the job, our group could not recommend him highly enough.

My travel companions for the trip were Ian Merrill, Andy Deighton, Barry Wright, Volkert van der Willigen and Clive Garland. I had travelled extensively with all but for Clive, it was great to spend time with the team and to meet Clive and we had a very amiable group.

Weather
The weather during the trip was very variable. In the Andaman Islands it was hot and humid at around 28c but on the coast there was often a more cooling breeze. Around Ooty we had an entire day of heavy rain and wind and low temperatures such that a fleece and rain jacket were just enough to keep one self warm. Our first afternoon at Mudumalai was much the same but perhaps a little warmer while on the second day it was brighter and pleasantly warm. The Munnar area was generally sunny and pleasantly warm while Perinar and, particularly, the Thattekkad area were warm to hot and humid.

Annoyances
Generally this was a very comfortable journey with no health issues encountered and hygiene standards were good. We encountered very few biting insects, a few mosquitos on the Andaman Islands but generally these were in such low numbers that they did not cause significant issues. We found leaches to be fairly uncommon with only parts of Perinyar warranting the use of leech socks, unless one is particular paranoid. We also encountered them in small numbers around Munnar but again, to me the odd leech bite is of no great concern and I was not tempted to wear my leech socks. We came across evidence of Elephant at many sites and it goes without saying that one needs to be extremely aware of the possibility of encountering them, the same should be said of Gaur.

Photography
Photographic opportunities on the trip were not fantastic as is usually the case with forest birding. Either the conditions were very dark due to overcast conditions and heavy canopy cover or birds were above us in the tree canopy. There is always an excuse for taking crap pictures, nothing to do with the skill of the photographer.

I took with me my Canon 1DX Mark II, Canon 400mm DO Mark II and a Canon 1.4 Mark III Extender. I also took my Canon Speedlite 580 EXII flash. Largely this combination was suitable for the conditions. I generally removed the extender when in the forest and when using the flash for night birds. 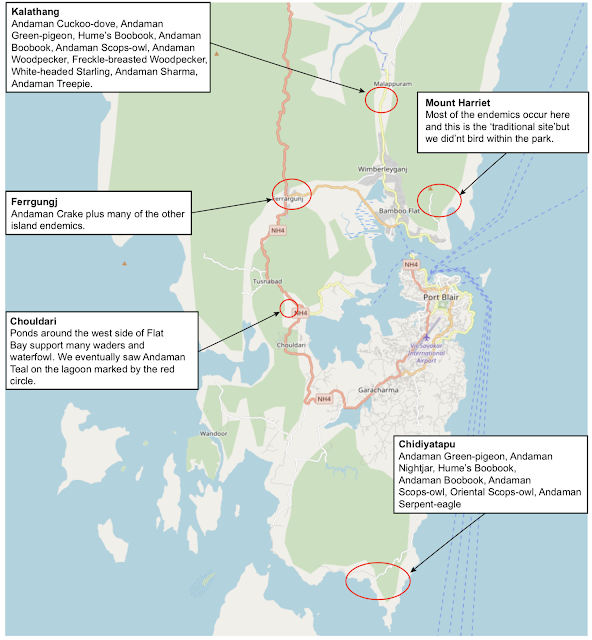 Map showing the key sites and species within the Andaman Islands (click the map to enlarge it). Some endemics are common such as the Drongo and Bulbul and these are not shown in the text boxes as they are frequently encountered. 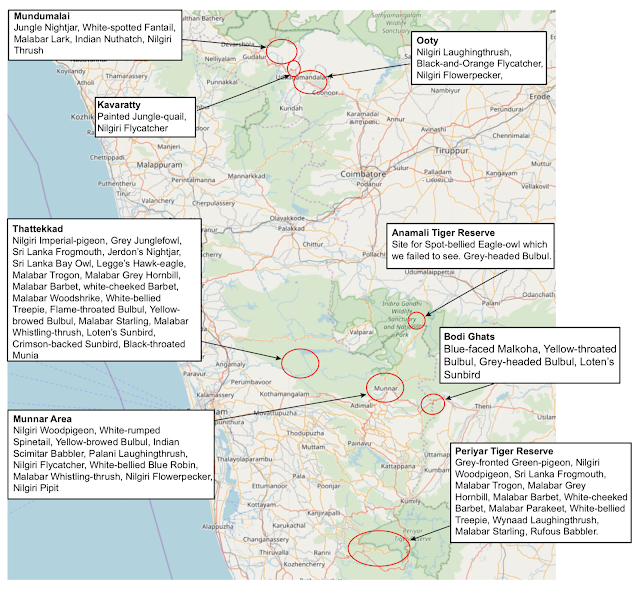 Map showing the key sites and species within the Western Ghats (click the map to enlarge it). Some endemics are common such as the Indian Swiftlet are not shown in the text boxes as they are frequently encountered.


25th November (Day 1) - International Flight
My British Airways flight to Chennai (formerly Madras) from Terminal 5 London Heathrow was scheduled for departure at 14:20 but on check-in I was told that it was running 10 minutes late. After buying a few bits I headed to the BA lounge where, to my dismay, the flight was now scheduled for a 15:40 departure, this would have been fine but for the fact that I had a fairly tight domestic flight from Chennai to Port Blair on the Andaman Islands. After speaking to the BA staff they suggested a 06:45 arrival with my domestic due to depart at 08:15. This left little time to clear customs, collect my bags, check into the domestic and make my way through departures – pressure now on! Anyway, there was little I could do but to make my way to the complimentary BA bar and then make sure that I did not miss my flight from Heathrow. So I found a seat, grabbed some lunch and wine and began genning. Once in the air we headed south-east over Europe, the Black Sea and over the Middle East passing over Karachi in Afghanistan and routing over Ahmadabad, then passing east of Mumbai towards Chennai.

Links to Other Days of the Trip (Click to View)