The red admiral is one of my favourite butterflies and is a familiar site feeding at ivy blossom, buddleja, blackberries and windfallen fruit in the autumn. The species is familiar throughout the UK and can be found in inner city areas where buddleja is a favoured foodplant. The red admiral occurs throught the USA, Europe, North Africa and as far east as Iran. Some populations are strongly migratory and influxes into the UK are thought to originate in Europe or as far south as North Africa. While the species overwinters in small numbers in the UK in the spring numbers are bolstered by early immigrants. However, numbers reach their peak in the autumn after successful breeding during the summer months and additional waves of immigration. A recent walk in Kenidjack Valley to the east of St. Just produced over 75 feeding on ivy blossom and while many of these may have emerged in the UK it is probable that many were fresh immigrants from swollen European populations.

An easterly theme prevailed today with no sign of yesterdays magnolia warbler on Fair Isle but a Blyth's pipit on Foula, Shetland, paddyfield warbler on Fair Isle, river warbler on South Ronaldsey and a Blyth's reed warbler on Whalsey, Shetland meant the eastern influence maintained its grip. But best of all came from Inner Farne with a stunning White's thrush. There has been a single previous record of White's thrush in Northumberland from Holy Island on 2nd November 1914. Read Will Scott's account here:

Oh, to have been on Fair Isle today, after all the yellow-browed warblers of yesterday (14 reported today) a stunning magnolia warbler was found, fittingly, on the west of the island at Copper Geo. While common in the USA, there is only a single British record of this species from St.Agnes, Isles of Scilly on 27th and 28th September 1981. An account and photographs of the Fair Isle find can be seen here.

I have previously seen this species widely in the USA and central America, here is a  bird photographed in Mexico, although unlike the Fair Isle bird which appears to be a 1st winter, this is an adult in non breeding plumage: 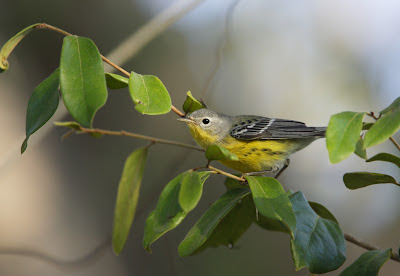 The very same weather patterns as produced the influx of yellow-browed warbler of yesterday are clearly producing the same from the west, if one studies the synoptic chart shown on the blog from 21st a clear westerly airflow can be seen generated by high 1033 and low 990. This airflow clearly originating from the coast of the USA and Canada.

Also on the island today were a lanceolated warbler, Arctic warbler and a Blyth's reed warbler, a cliche, but truly an east meets west collection. Further afield this cliche was repeated on Shetland with a Swainson's thrush and Sykes's warbler on Foula and great snipe and buff-breasted sandpiper on mainland Shetland. How will Scilly respond? What about one of these: 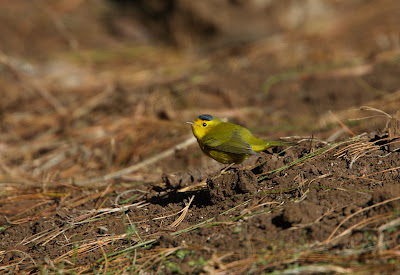 The only British record being of a bird at Rame Head, Cornwall on 13th October 1985 in a similar plumage to the one above.

Overnight on 21st September a large fall of yellow-browed warbler occured on the east coast of the UK from Shetland south to Sandwich Bay in Kent. It is difficult to estimate the number of birds involved in this fall but at least 60 were recorded with, for example, five birds on Fair Isle and 11 birds at Spurn. This record is all the more remarkable as prior to the 21st September there had been no records of this annual visitor so far this autumn.

Yellow-browed warbler is a common breeding species in temperate Asia occuring from the Urals in the west to eastern Siberia. The species winters in south-east Asia and is common in, for example, Thailand and Malaysia. This migration means that birds cover distances of up to 5,000Km to travel from their breeding grounds in the north to their wintering grounds in the south. It is likely that the birds that occur in the UK originate from the western areas of the breeding range meaning a distance of around 3,500Km to reach our shores.

Conditions for migration from the breeding grounds have recently been ideal with a high presssure centred over central Asia. This high pressure had an easterly air flow along its northern edge encouraging drift of birds as they migrated south. This easterly airflow and fine weather extended all the way to the UK facilitating this drift. Fronts associated with a low pressure 1011 are likely to have result in the grounding of these migrants as they arrived from the east.

The yellow-browed warbler is one of my favourite autumn birds and little can beat the thrill of finding this species as it flits amongst the autumnal leaves of willow and sycamore.

By the 24th September the first yellow-browed warblers reached the Isle of Scilly perhaps indicating their westward spread from their east cost arrival point.
Posted by Simon Colenutt at 16:38