Cornwall and the Isles of Scilly - 23rd to 30th October

It was time for our annual holiday to the Isle's of Scilly but this year we were fearful that, with increasing Coronavirus cases, we may have to cancel as a result of a second national lockdown. But 22nd October arrived and we were free to set-off to Cornwall, the drive was relatively traffic free and we arrived in good time. But during the drive I had a call from Skybus saying that due to the poor weather our flights on 24th had been cancelled and did we want to fly on 22nd instead, I checked that we could book an extra night at our hotel and agreed to bring the flight forward which turned out to be fortuitous.

On 23rd I spent a couple of hours birding at Zennor walking south up the valley and then north towards the sea. It was fairly slow going but a small passage of 110 Redwing north and a single Firecrest in the willows by the road were good to see. My eBird checklist can be viewed here. In the afternoon we headed to Land's End airfield for our late flight to St. Mary's landing at 17:00.

The 24th was a stormy day with strong west winds and some very heavy downpours and we stayed on St. Mary's wandering around Peninnis, Old Town, Lower Moors and Porthloo with a lunch stop at Juliet's. The highlights were a self-found Olive-backed Pipit at Old Town, a Mandarin Duck at Lower Moors, Dusky Warbler and Black Redstart at Porthloo, a Nightingale at Porthcressa and Yellow-browed Warbler at Lower Moors - not a bad list given the weather. My eBird checklists for the day can be viewed here and here. In the evening news broke of a Rose-breasted Grosbeak found at the end of the day on Gugh and with a special ferry laid on for first thing in the morning I opted to catch this and meet Sarah and Tobias a little later from the normal timetabled ferry on St. Agnes. 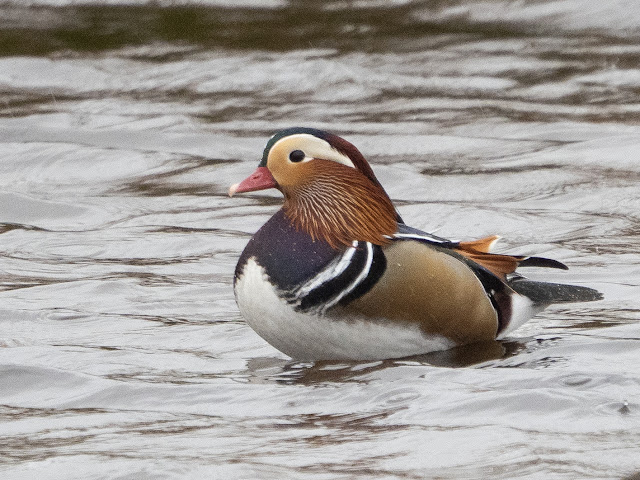 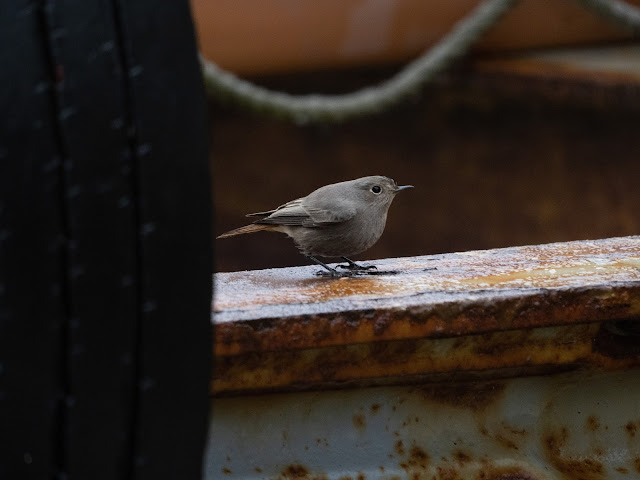 On 25th it was an early start, and with no breakfast, but by around 09:00 I was on Gugh looking for the Grosbeak with around 30 other birders. Unfortunately, the bird seemed to have departed and as the tide began to cover the Gugh bar I decided to bird on St. Agnes for the last hour or so before I was to meet Sarah and Tobias. Just as we met, news broke of a Red-eyed Vireo at Lower Farm and so we decided to pay this bird a visit and the bird showed well as it fed in an Apple tree. This was my 8th Red-eyed Vireo that I had seen on the islands having found three of these. We spent the day wandering around this beautiful island, probably my favourite of the archipelago, but saw relatively little. At 14:15 Sarah decided to head back to St. Mary's as she wanted to get some work done but Tobias and I decided to stay on Agnes. Good job we did, at around 14:20 news broke of an Indigo Bunting at the bonfire site beside Big Pool, Tobias and I were at Cove Vean and a short dash and we were on site and watching this mega rarity, only the 4th for the UK assuming its accepted. My eBird lists for the day can be seen here and here. 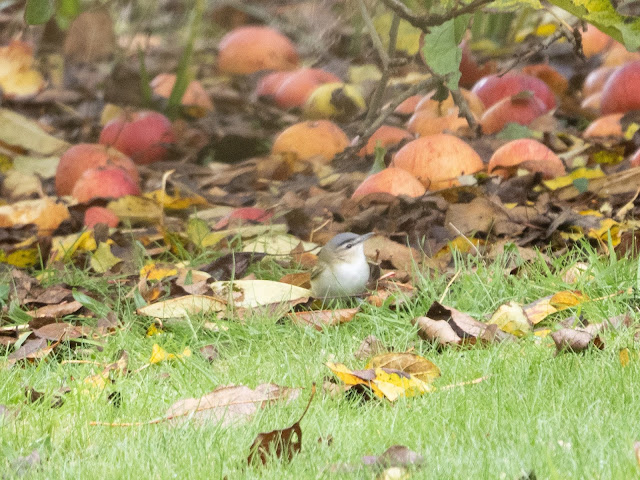 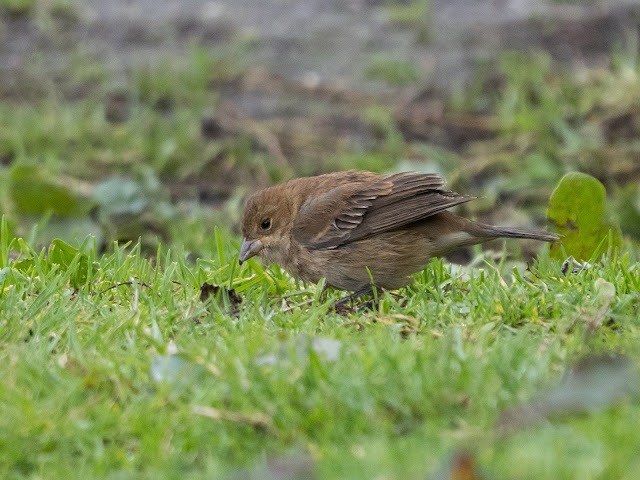 On 26th we headed over to Tresco and as we were waiting for the ferry to depart, news of a Lesser Yellowlegs on the Abbey Pool broke. We landed at New Grimsby and decided to wander along the north edge of the Great Pool birding on the way but didn't see a great deal. At the Abbey Pool the Lesser Yellowlegs showed very well down to around 15m and was feeding avidly. Other than three Yellow-browed Warbler and a Black Redstart we saw little for the rest of the day. My eBird list for the day can be viewed here and here. 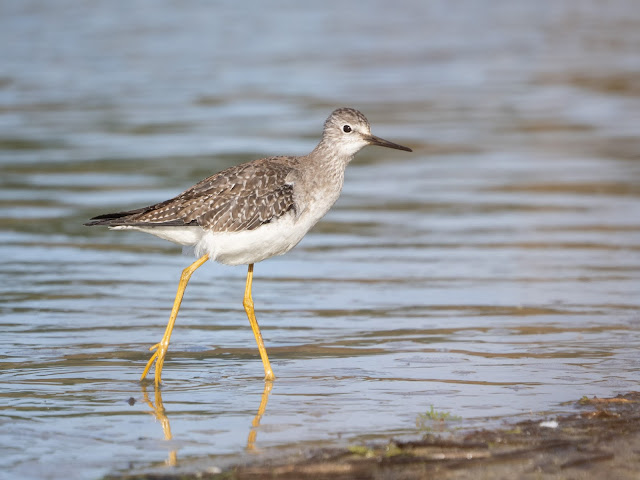 The 27th was our last day on Scilly and we decided to stay on St. Mary's for the day. I skipped breakfast and birded Peninnis, Old Town area and Lower Moors before meeting with Sarah and Tobias and walking the Garrison and then to Juliet's for lunch. We saw little but for two Yellow-browed Warbler and a Firecrest. After lunch we wandered through the centre of the island and back to the airport. At Parting Carn I picked up the Glossy Ibis that had been present for much of our stay feeding in a pig field and enjoyed good views of this bird before heading to the airport for our 16:55 flight back to Lands End. My eBird checklists for the day can be viewed here, here and here. 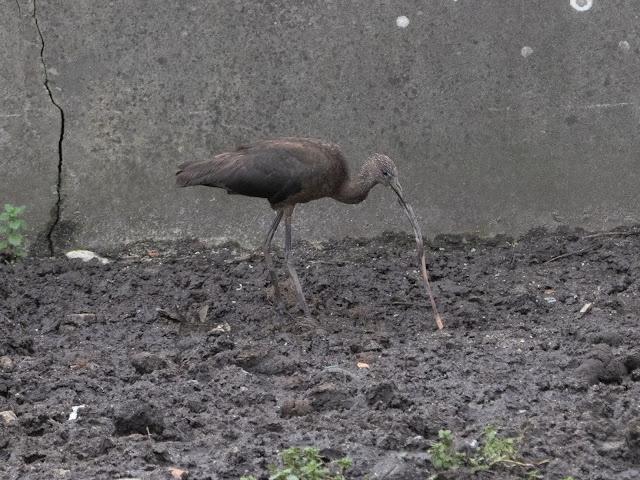 On 28th in strong NW winds, I started the morning with a seawatch at Pendeen with large numbers of Gannet, Auk and Manx Shearwater passing. Highlights were a Balearic Shearwater, Great Skua, two Puffin, Red-throated Diver and seven Great Northern Diver. My eBird checklist can be viewed here. A short stop at Cot Valley produced a single Yellow-browed Warbler but little else, my eBird checklist can be viewed here.

On 29th October I started with a seawatch at Porthgwarra but despite the strong SW winds there was little to be seen. The bushes produced a couple of Yellow-browed Warbler but were otherwise it was very quiet. My eBird checklist can be viewed here.

On 30th we were heading home but I spent a little while birding at Copperhouse Creek and Hayle before I had to head back to pack. Needles to say, there was little to be seen here, the highlight was a Firecrest. My eBird checklists can be viewed here and here.