The recent run of cold easterly winds appears to have extended what feels like a long cold winter into the time of year when we have come to expect a spell of fine and warm weather. The winter has been a quite one in terms of rare birds with the highlights being a Pied-billed Grebe at Ham Wall RSPB Reserve and a Harlequin Duck at Balranald RSPB Reserve on North Uist.

The Pied-billed Grebe was first found on 15th February from the second viewing platform of the superb wetland reserve of Ham Wall RSPB. The bird is still present at the time of writing this post on 24th March and like many of its predecessors is likely to be a long stayer. The bird is elusive at times disappearing into the reedbeds that flank the pool on which it frequents, however, it regularly performs well. This bird appears to be an adult with its distinct black chin and throat and blue-grey eyering and bill, the latter crossed by an irregular black band. I visited the site on 18th March after a meeting in Yeovil and after an hours wait the bird swam into view and began calling, a kind of cross between a Little Grebe and a diver with a hint of Common Crane thrown in! Evidently the bird is looking for a mate but it could be a long wait.

There are a total of 52 records of Pied-billed Grebe in the UK with the first as recently as 1963. Many stay for protracted periods of time with the longest staying bird from 2nd April 1993 until 13th September 1995 at Stithians Reservoir, Cornwall this bird hybridised with a Little Grebe and reared at least three young. The Pied-billed Grebe is distributed throughout the Americas where it is a short range migrant moving southwards from the northern parts of its breeding range. 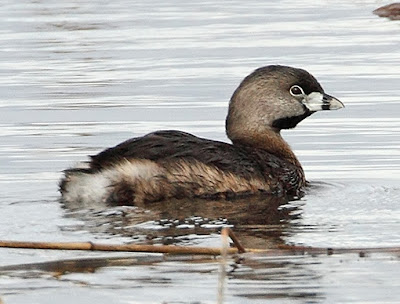 The Harlequin Duck was found on the 18th February and again is present at the time of the writing of this post. While not in full plumage the bird is nonetheless a stunning 1st winter male showing male characters in a subdued manner and with a scaly whitish belly. The bird frequents the coastal waters of the reserve and can often be seen hauled out on the kelp covered boulders that line the shore. 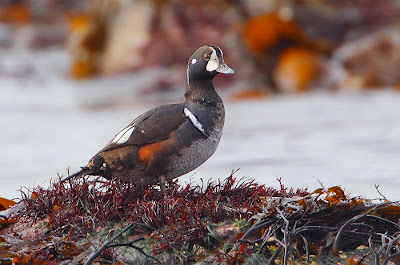 There are only 14 previous records of Harlequin Duck in the UK with the most recent being an adult male on St.Kilda on the18th June 2007. The last twitchable bird was a female on Lewis from mid-January until 20th May 2004. The Harlequin Duck is found from East Asia,, north-west and north-east North America, Greenland and Iceland. The species winters on the coast and during the spring moves inland along streams to breed.
Posted by Simon Colenutt at 18:29