After what has been a quiet winter for rarities a not wholly unexpected Pine Grosbeak was found at Collafirth on mainland Shetland on the 29th January 2012 and constitutes perhaps the best bird of Winter 2012/13 to date. The bird, a first winter male, has been showing well close to the pier at Collafirth where it has been feeding on conifers. This is the 12th British record of the species with only seven records since 1950, the most recent being from 8th to 10th November 2004 at Easington in Yorkshire. Records are from March, May, October and November with four of the records from the latter month. The distribution of records shows and east coast bias with two records each from Shetland, Yorkshire and Kent. 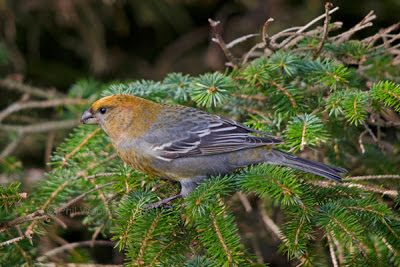 
The Pine Grosbeak is distributed across the boreal areas of Northern Europe, Northern Russia, Alaska, Canada and North America where the small amount of racial variation involves size and the intensity of colour in the adult males. Across this extensive range the species is a fairly common bird found in confer, Alder and Birch forest where it feeds on a range of berries, seeds and in the summer, insects. The Pine Grosbeak is a sedentary or patially migratory species prone to erratic eruptive movements to the south of its range. These movements are driven, in a similar manner to Waxwing, by a failure in the winter food supply with, in some winters, most of the population remaining close to the breeding grounds and in others entire populations may move hundreds of kilometres south from the typical wintering grounds. The autumn of 2012 experienced such a movement with many hundreds of birds being seen in Scandinavia from August through November, with this large movement hopes were high for a long awaited British record although many hoped for a mainland bird.

It was a pleasure to be working on site today, the sun was shining and it truly felt like Spring was around the corner. The site is located just to the north of Romsey and is a tree lined lake which affords a high degree of shelter and receives the first of the suns warmth. In the morning light a pair of Great Crested Grebe were performing their courtship displays with face to face ritualised head-shaking and preening but this morning the display not progressing into the spectacular 'weed dance' . Other signs of Spring included Rook carrying nest material back to their nests and a great deal of activity around the local rookery.  The first Colt's-foot in flower with attendant Drone-fly Eristalis pertinax added a splash of colour to still bare earth banks. 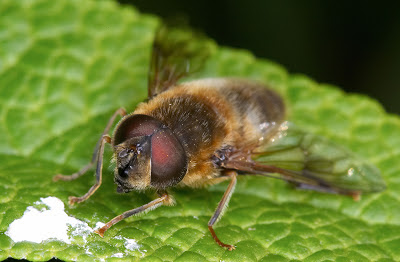 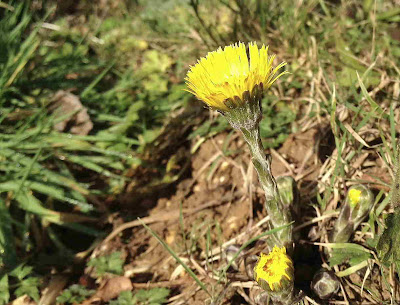 
It's been a lot longer than intended to post my latest blog, what with Christmas and New Year festivities, preparing for the arrival of Sarah and my baby in the coming months and the joys of the end of year tax return time has just been too short to either go birding or post here.

My first birding outing of the year came as late as 19th January following heavy snowfall that bought much of England to a grinding halt. I ventured out on the local patch for the first time in 2013 hoping that the freezing conditions will have led to a reshuffling of birds at the site. It was not long before the first of the unusual visitors, for the patch at least, appeared with five Wigeon on the River Test flowing warm and unfrozen through its frozen flood plain. Next was a patch tick, a fine adult winter Mediterranean Gull loitering amongst an inflated Black-headed Gull flock (up from the usual 70 to 180 birds) on the snow covered fields. Then another patch record , a group of six Stock Dove and next yet another patch record a quite astonishing flock of 200 Lapwing settled in the fields, the previous highest count being a flock of 25 flyover birds. Other good patch bird included 30 Fieldfare, 6 Skylark, 11 Snipe, 3 Goosander and 6 Tufted Duck. So all in all, on a local scale I was very pleased with my first venture onto the patch in 2013, my sightings clearly being enlivened by a cold weather movement.

Cold weather movements were a feature of this period throughout the country with many species heading south and west to escape the severe conditions. Cold weather movements are often caused by freezing conditions on the continent causing birds to move west to the British Isles. The mild conditions of the British Isles, as a result of the warming influence of the Atlantic Ocean, may result in large numbers of birds escaping the colder continental climate to winter here. These movements are driven by food shortages as a result of the frozen conditions. Classic families associated with these movements are Plovers, Thrushes and Skylarks - some such as Tufted Duck may undertaken local movements from frozen still freshwater bodies to more coastal or flowing waters which remain ice free while others may move hundreds of miles.

A visit to Pennington Marshes on 20th January revealed huge numbers of Fieldfare that had clearly escaped from colder conditions to the coast, which at Pennington was relatively snow free. Whether these birds were continental or of UK origin is not known. Fieldfare are usually nervous birds and difficult to approach but these birds were confiding, preoccupied with feeding after escaping frozen conditions. I estimated that there were around 2000 birds present but a constant easterly movement may have meant a significant underestimation in numbers. Intriguingly there were very few Redwing present, presumably these had moved elsewhere - perhaps further south? 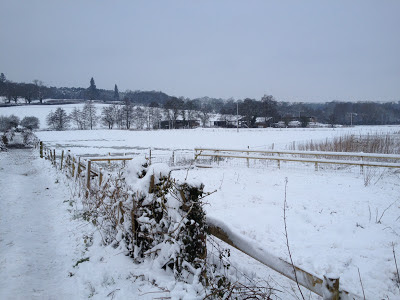 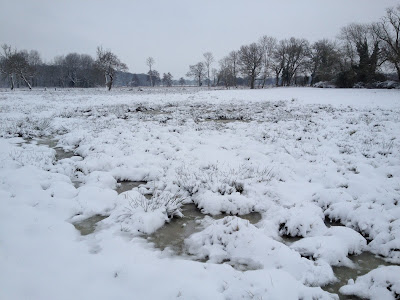