A chestnut-eared bunting has been found at Pool of Virkie, Shetland. The bird was found on 23rd October but was initially identified as a little bunting. The bird has been showing well for much of the 24th and 25th October but was not seen after. If accepted this will be the second for Britain after the first from 15th to 20th October 2004 on Fair Isle. This is a stunning image of the bird taken on 24th October by Jim Woods: 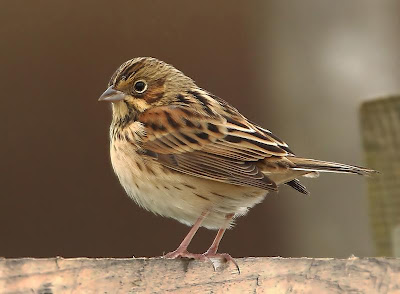 
Additional photos can be seen here

The chestnut-eared bunting is perhaps a surprising candidate to turn up in the UK being a relatively short distance migrant from its breeding grounds in northern Afghanistan patchily eastwards to Japan and wintering in the southern parts of its range in Korea, southern Japan and northern Indochina. The nominate subspecies fucata has a breeding range located entirely east of Lake Baikal, this is a migratory race and the most likely to occur in the UK. Other than the 2004 Fair Isle record the only other record from the Western Palearctic that I am aware of was in October 2011 at Uppland, Sweden, photos here:

Excellent comparative photographs of little bunting can be found on Steve Arlow's site:


Also, on 23rd a Siberian rubythroat was on Fair Isle but this bird was not seen again, this would be the 9th British record if accepted and assuming last years bird on Shetland is accepted.
Posted by Simon Colenutt at 11:08