Sarah and I spent the weekend (2nd-5th November) in Cornwall just to the west of St.Ives with the intension of some relaxation and a little birding. The birding was very quiet, not surprising given the weather conditions with a strong west to north-west wind, and sole rewards were a couple of firecrest in Cot Valley.

Sarah and I spent the morning of 4th November with our good friends Nigel Wheatley (http://www.wheretowatchbirdsandotherwildlifeintheworld.co.uk), his partner Alice and sons Ned and Tom in St. Just. We started the morning by bowling up to a stunning waxwing feeding on cotoneaster berries close to the junction of Victoria Row and Bosorne Road (thanks for pinning it down Nige and Alice!). There has been a small (but building) influx of these stunning birds into the UK over the previous three to four weeks with the first of the season being from Shetland on the 15th October and with birds arriving further south a little later in the month, with for example, the first birds in Norfolk on 25th October and reaching the Isles of Scilly on 31st October and mainland Cornwall on 2nd November. 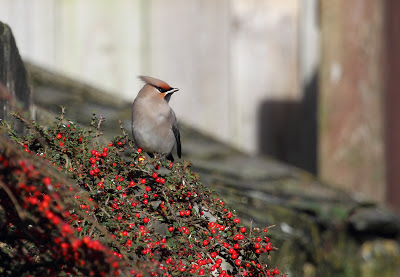 Waxwing breed from north-eastern Fennoscandia east across boreal areas of Russia to Kamchatka and from Alaska east to Hudson Bay. Their winter range is almost a southern ‘mirror’ of the breeding range with the regularly occupied range extending from the Balkans and Caucasus east through Kazakhstan to north China and Japan and in the USA the central states. Waxwing is a partial migrant but is particularly known for its eruptive movements with some winters seeing large arrivals of several thousand into the UK while others see far fewer. These arrivals occur as a result of a low supply or failure in the main autumn food source of berries forcing birds to move to areas outside of their regular wintering grounds. The largest arrivals occur when a productive breeding season is followed by high overwinter survival as a result of a good berry crop resulting in a large source population which are then confronted by a poor berry crop the following autumn. It is likely that the majority of waxwing arriving in the UK originate from Scandinavia.

The winter of 2012 to 2013 looks set to be a good waxwing winter so keep your eyes peeled wherever there are berries - favourites being rowan, cotoneaster and hawthorn berries. Rowan in particular is commonly used as a visually attractive plant in landscaping schemes associated with supermarkets and housing estates so these are often favoured habitats for winter flocks.
Posted by Simon Colenutt at 21:39