I have long wanted to visit the Varanger area of Norway famous in birding circles for its wintering seaduck and gulls, in particular, I wanted to see the almost mythical Steller's Eider and the glamorous but not so mythical Pine Grosbeak. I had teamed up with my lifelong friend Trevor Codlin (The Barley Bird-er) and we had been planning the trip since before Christmas. There were no ticks on the trip for Trev but he was keen to visit the area and to spend a long weekend birding.

Logistics
We flew SAS from London Heathrow (Terminal 2) to Kirkennes and then onto Oslo but it is also possible to fly to Ivalo I suspect although I didn't look into the logistics of this, we did meet two British Birders who had done just this. On the outward journey we had an almost five hour stop-over in Oslo so decided to employ Simon Rix (see blog at Oslo Birder) for a couple of hours birding, this worked very well and Simon was an excellent guide. For the ground arrangements in the Varanger area we used Din Tours who were excellent during the booking process. We used their ‘self guiding’ system which involved receiving gen for the sites and also a Sat Nav to guide us around. However, while we thought this package was to be in the hire car which we collected at Kirkennes we did not receive it until we arrived at Vadso and by then we felt it was not needed due to the abundance of local information particularly at the excellent Vadso Fjord Hotel which is set-up for birders. I recommend following an itinerary such as ours and booking this for oneself.

Itinerary
This was the itinerary that we had devised for the trip:

Weather
The weather during the trip was very variable and changed rapidly. On the first day we experienced severe blizzard conditions but thereafter largely it was cloudy with occasional snow showers or sunny. Winds were generally light to moderate although it was also calm on a couple of days but with stronger winds on our first day. Temperatures ranged from -3 down to -15 during the day plus wind chill.

Diary - 19th March
The start of our trip to Norway and I overslept this morning, I meant to get up at 05:00 but didn't wake until 05:40 so after a mad dash around the house gathering bags I headed to the office to meet Trev at 06:15. We then drove up the M3 to Heathrow which was actually not too bad and arrived at Terminal 2 at around 08:00 for our 10:55 flight to Oslo. We had some breakfast and chilled before boarding plane. All went smoothly to Oslo and landed at 13:30, collected bags and checked them back in for internal flight to Kerkennes and then headed out to departures collection point to meet Simon Rix. Simon is an English birder who moved to Norway 11 years ago and has set up a tour company leading birders in the local area. It turned out that Simon and I had met one another in 1987 at Dungeness Bird Observatory when I was an assistant warden there. While there were not a great deal of birds to be seen we decided that a few hours of birding was to be more enjoyable than four hours sitting in the airport. Our main stop was for a flock of Taiga Bean Goose that stage here between their wintering grounds in Scotland and their breeding grounds in Arctic Russia. More can be read about the Bean Geese on the 'Angus Bean Goose Blog' here. The drive to the Bean Goose site was through a patchwork of pine forest, cultivated fields and stubble. We saw a few common species en-route such as Bullfinch, Mistle Thrush, House Sparrow and the like, a Great Grey Shrike dashed across the road in front of the car and we stopped and got some fairly good scope views, Lapwings and Yellowhammer singing in the background. We continue on to the Taiga Bean Goose site at Nikevegen, Simon pointing out a small stream with Eurasian Beaver signs including a large partly felled Silver Birch. On arrival the Taiga Bean Geese were on view at the at the far end of a field probably a couple of hundred meters away and so giving fair views, a number were sporting neck collars including GPS collars and standard unscripted collars allowing their movements to be tracked. We added a few more species to the day including Great Tit, Coal Tit and a superb flyover of Whooper Swan with about 20 seen in all and a single Common Crane. We then headed onto a small church and viewpoint at Udenes overlooking the Glomma River. On our way we saw two huge Moose in a field, one animal kneeling to feed on the fresh grass growth, Simon indicated that he occasionally sees them doing this in the spring. At Udenes birds seen included a couple of Whooper Swan, Goldeneye, two Common Crane circling high and droping into a distant field and a calling Willow Tit were added. We then headed back to the airport stopping for better views of the Great Grey Shrike. We said our goodbyes to Simon before joining a massive que for security at the airport. Simon's write-up of the excursion can be read here. A beer in the departure lounge was most welcome. 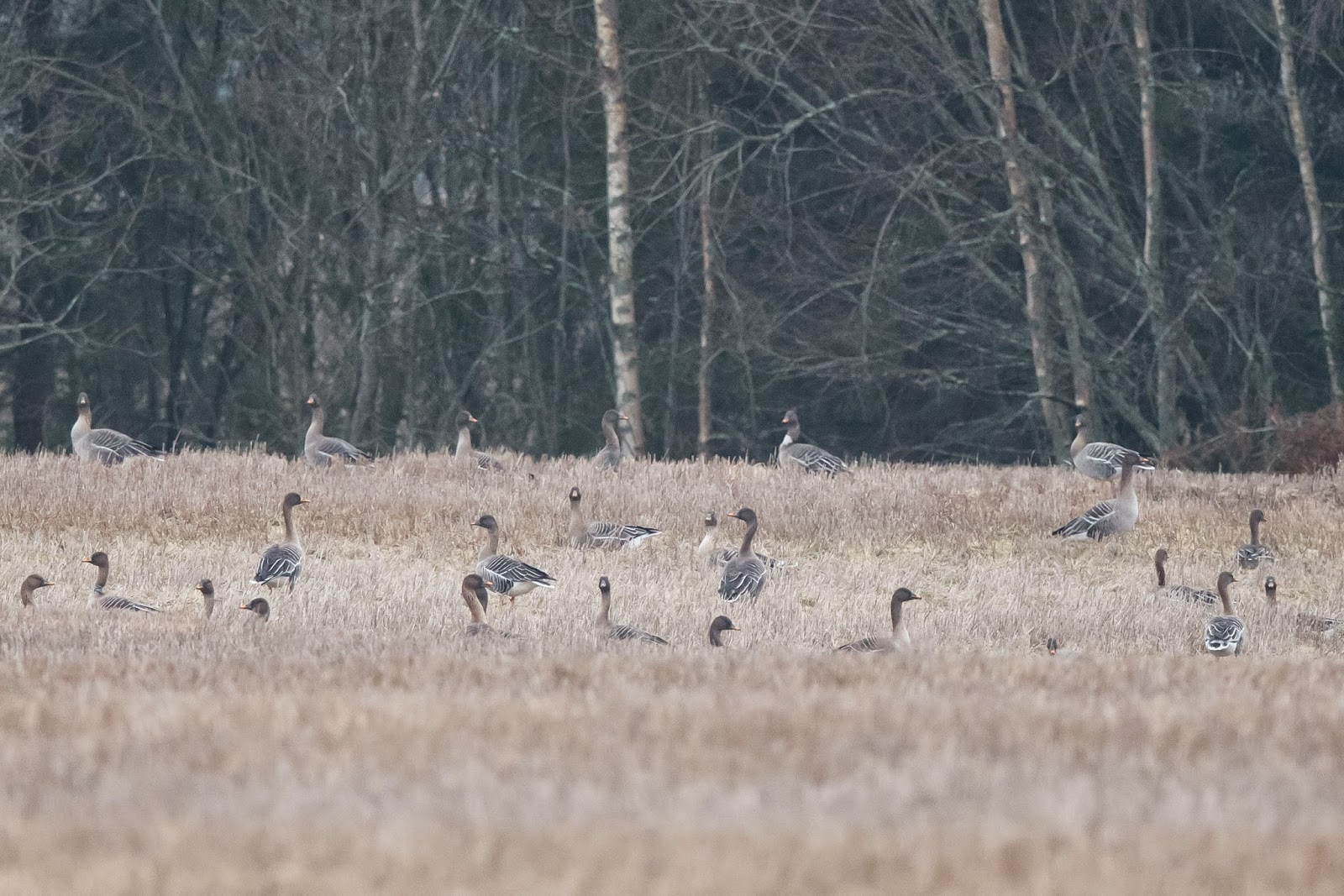 Taiga Bean Geese at Nikevegen part of the flock of around 150 birds that stage here. The bird to right of centre at rear has a satellite tracking neck collar. 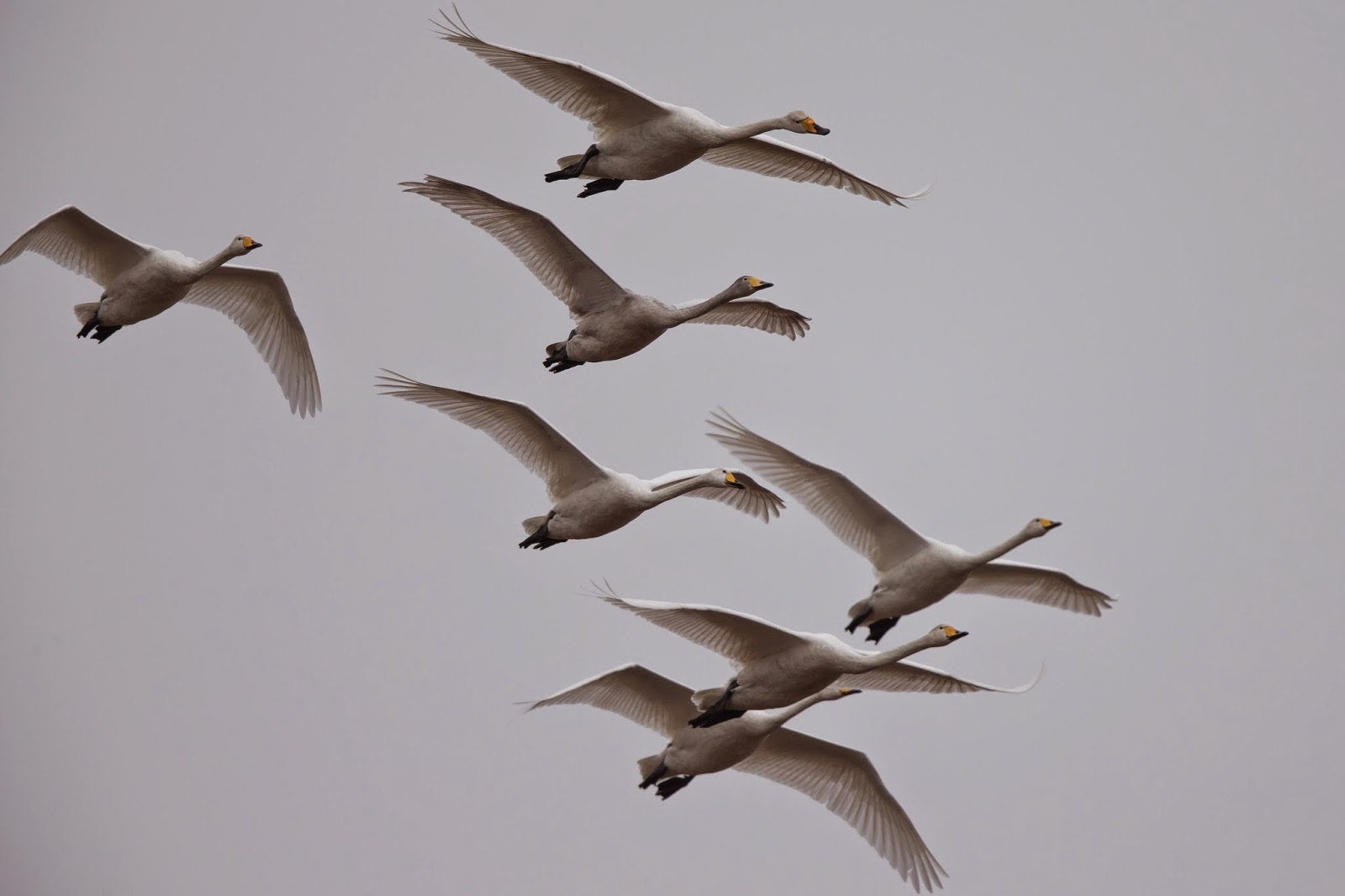 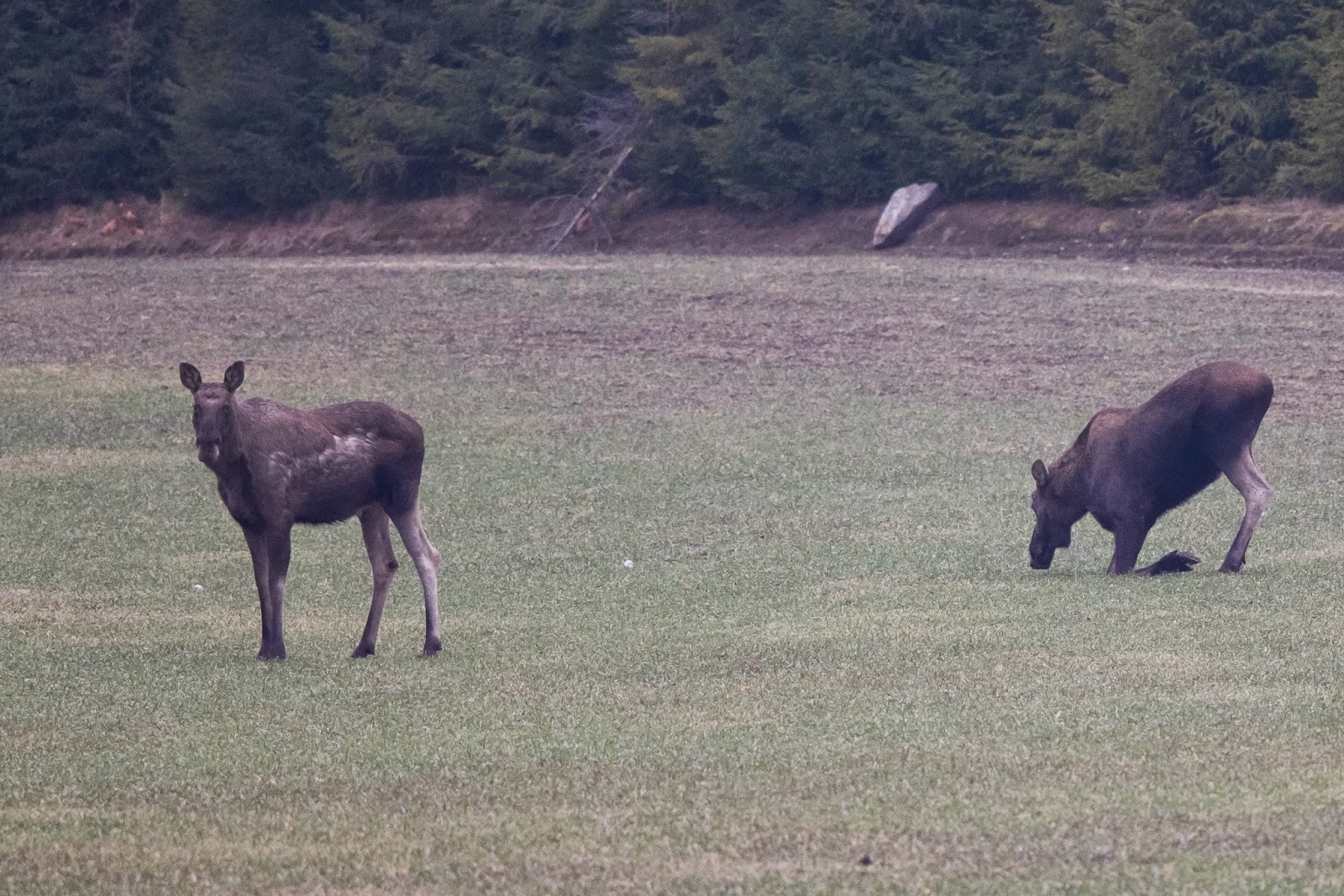 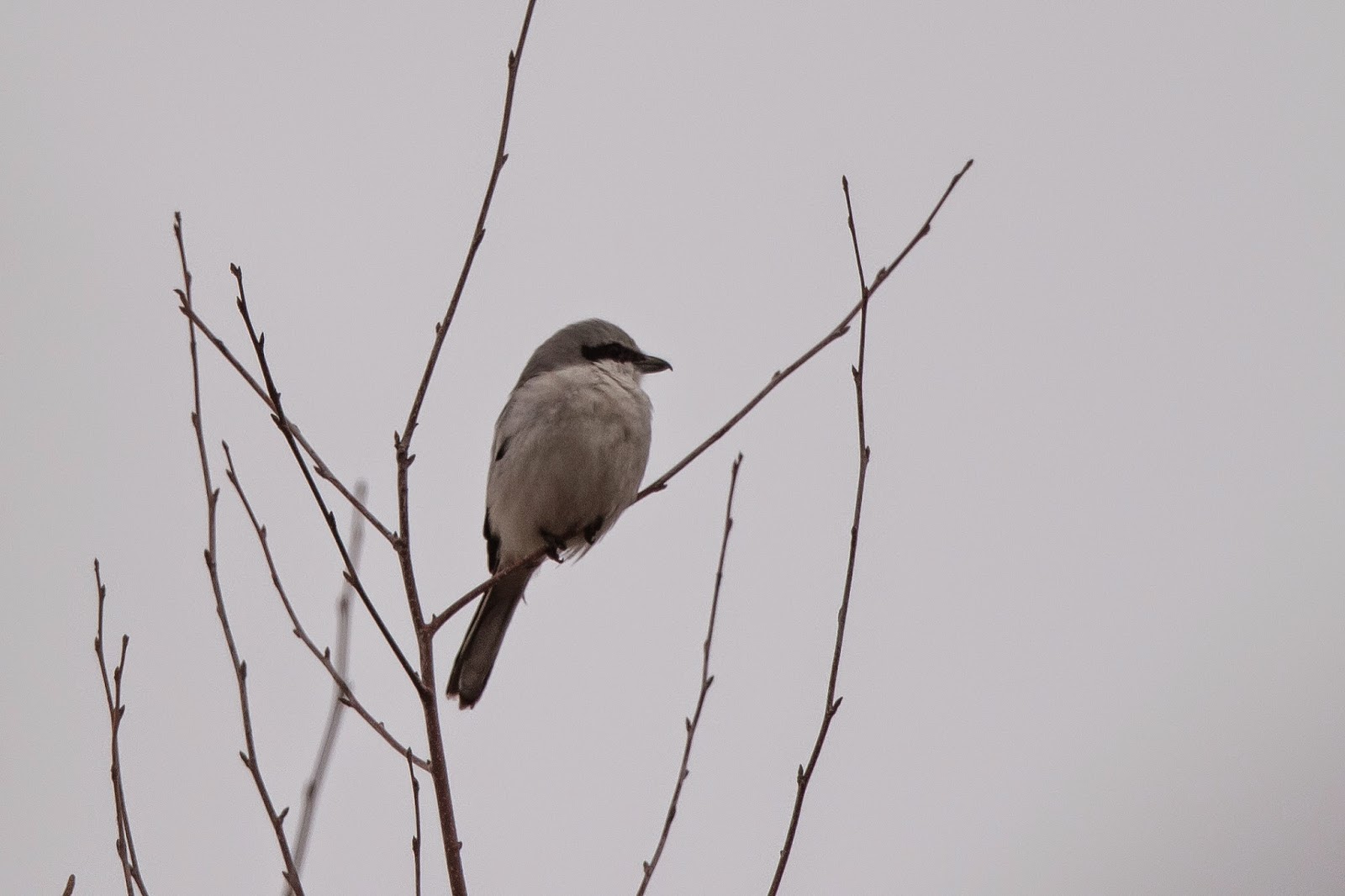 The flight took off more or less on time from Oslo to Kirkennes and all seemed good, we became suspicious when we were close to the airport and the plane started to circle, and then came the announcement, we were unable to land due to snow and poor visibility, we were to circle and wait for an opening in the weather. Then the next announcement and more positive this time, the weather had begun to clear and we would be landing and so the bumpy decent began. As we approached the runway the pilot roared the engine and we climbed steeply and suddenly away from the ground, the landing had been aborted, and then came the announcement, we were heading for Utsjokl where we were cleared for landing. We studied the map, it was miles away, the other side of a spur of Finland that projects into Norway. Still, it was good to see the lights on the ground after a very bumpy ride. So, we sat on the plane and then in the airport for around two hours before our bus finally arrived, just as we were getting diner, for our five hour drive eastwards back to Kirkennes. We left at 23:20 and arrived in Kirkennes at around 04:40. We checked into the Scandic Hotel and had a couple of hours sleep. 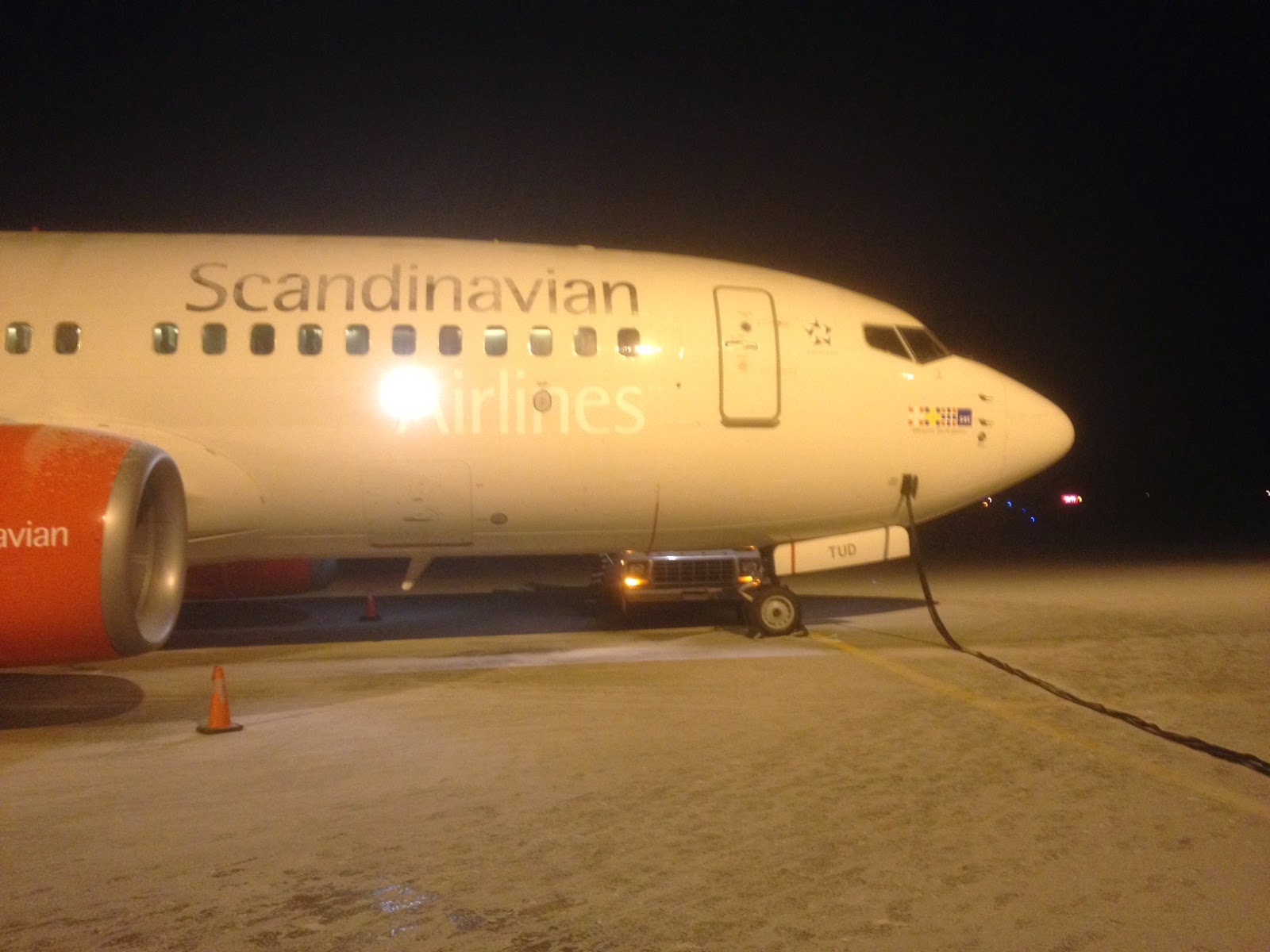 Our grounded SAS plane at Utsjokl