Background
Since a very young age one of my favourite bird groups have been the Bustards. I am not quite sure why as they are basically overblown chickens but there is something about their stately manner, shy character, often amazing courtship displays and open vista landscapes in which they occur that appeals. Of the 26 species (in accordance with HBW) of Bustard the IUCN list seven as Near Threatened, four as Vulnerable, two as Endangered and two as Critically Endangered. Having seen one of these Critically Endangered species, Lesser Florican in June 2015, I had read about the terrible plight of Great Indian Bustard in Birding Asia (Collar, N.J., Patil, P.S., & Bhardwaj, G.S. What can save the Great Indian Bustard, Birding Asia Number 23, June 2015) and was very keen to see this species.

The Great Indian Bustard is very closely related to Australian Bustard but differs in its larger size and on some minor plumage characters such as reduced white spotting in the black wing panel, all black crown lacking the white eyebrow of Australian and unbarred white neck of the male. It is primarily found in Rajastan in India with smaller relict populations in South-east Pakistan and areas of west and central India being formerly more widespread. The Great Indian Bustard has suffered a catastrophic decline over the last 30 years or so. Once the species was found in a range of scattered reserves and sanctuaries but one by one these populations have dwindled and disappeared to the point that now the species can only be seen, semi-reliably, in Desert National Park (Rajastan) where park guards reported to us during the current trip that only 49 birds remain. A military area to the north of Desert National Park supports a population but I am not aware that the size of this population is known and the area is difficult to access. The reason for this decline is not fully known but is likely to be a combination of factors from habitat loss and modification, excessive disturbance, predation of eggs and chicks, hunting, collision with obstacles such as pylons and wind turbines (of which there are many in the vicinity of Desert National Park) etc. The creation of closed areas within Desert National Park may, in my opinion, be counter productive to a degree in that these areas seem to support very dense grassland where scrub encroachment may result in the habitat becoming unsuitable. The outlook for the species is indeed bleak.

In addition to Great Indian Bustard there were a number of other targets that the trip offered. I have long wanted to see all of the Crane and Wheatear species of the world, with perhaps the exception of Somali Wheatear for obvious reasons (although recently trips have been recording this species in Somaliland which is said to be relatively safe to travel in – but you wouldn’t get me there!). The trip provided me with the chance to see two new Crane species, Sarus Crane and Demoiselle Crane, and two new Wheatear species, Variable Wheatear and Red-tailed Wheatear. These four species were high on the target list.

Sarah and my time to complete the trip was limited as Tobias was being looked after by my dad and step mum and while many combine the trip with a trip to the Great Rann of Kutch for species such as Hypocolius, Marshall’s Iora and White-naped Tit we could not afford this time. My priority was Great Indian Bustard given its Critically Endangered status and so we decided to visit Desert National Park in Rajasthan and Little Rann of Kutch in Gujarat. These sites are located in the west of the country to the east of the Pakistan border.

The trip was organised by Asian Adventures, the same company that organised our trip to see Lesser Florican. Our guide for the duration was Ganesh Adhikari, his birding skills were fairly good and he knew where to find the key bird species I wanted to see. We also had a driver for the duration. Asian Adventures charged £750 per person for the two of us plus international flights and items of a personal nature. We stayed in the best hotels available in the two areas and it would be possible to stay in reasonable hotels and reduce this cost further. I think this was a fairly good price and if you were able to get a small group together the individual cost could be reduced further. The trip was well organised with a good car, the only problem we had was the delay of our internal flight outbound which meant we missed an afternoons birding at Khichan for Demoiselle Crane but this was not to matter in the long run. 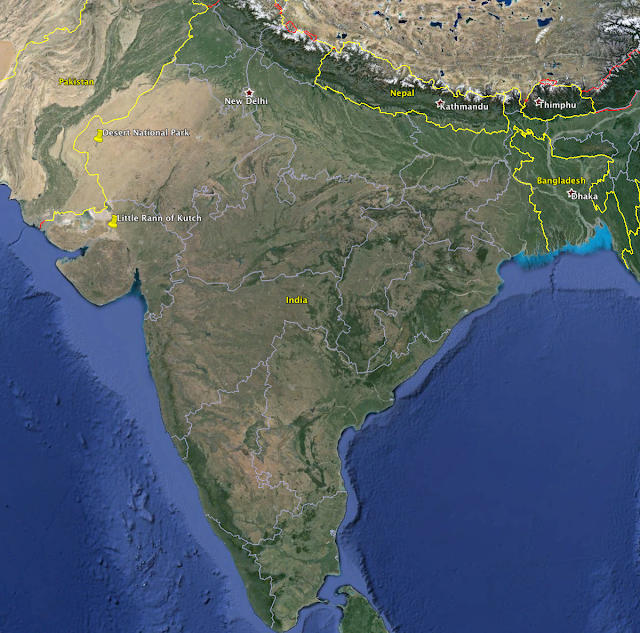 Desert National Park and Little Rann of Kutch, India - 8th February (Day 1)
After a sleepless night due to the pounding of our house by Storm Imogen we were up at 04:00 and headed for London Heathrow at 05:00 arriving at around 06:30. We then relaxed in the British Airways Club Lounge waiting for our 11:20 flight to Delhi. The flight went smoothly and I managed a few hours sleep while Sarah watch films (Steve Jobs, The Crays and Straight Outta Compton).

Desert National Park and Little Rann of Kutch, India - 9th February (Day 2)
We landed at 01:15 but it took an absolute age to get through the new eVisa system in Delhi airport and by the time we collected our bags it was gone 03:00. We met with the Asian Adventures rep and after unsuccessfully trying to withdraw cash (we withdrew 20,000 Ruppee of the 79,100 we needed) we headed to the Shanti Palace Hotel where bed was very welcome. However the night was a relatively sleepless with paper-thin walls and neighbours who were up at 05:30. We stirred at 08:30, had breakfast of fruit, cornflakes and curry. We were then transferred to the airport. Delhi was thick with traffic, and the smog was thick reducing visibility to a few hundred metres. We saw our first Black Kite, Shikra and Jungle Myna. Our 12:40 Air India flight to Jodphur was unfortunately delayed until 14:15 and while we relaxed in the airport we saw Black-shouldered Kite and Pacific Swallow.

We met our Asian Adventures guide, Ganesh, and driver and headed through the colourful streets of Jodphur with fruit stands and ladies in rainbow Sari’s amid the dust, dogs and innumerable plastic bags that blight the Indian landscape. Then as we left the city the countryside became a flat mix of scattered scrub, grassland and small crop fields and from the car we saw White-cheeked Bulbul, Variable Wheatear (both new species seen as blurs from the car), Ring-necked Parakeet, hundreds of Collared Dove, Laughing Dove, Black Kite, Steppe Eagle, Griffon Vulture, Red-wattled Lapwing, Indian Roller and Common Babbler. The town of Baldasar was a notable village that we passed through with deep marble quarries and the roadside piled high with crafted slabs of marble ready for export and local trade. The town of Pokharan was a typical dusty and litter strewn village where local people sold vegetables, repaired vehicles and shaved faces while dogs, cows and pigs sifted through the roadside waste. We eventually arrived in Jaisalmer at around 21:00 and checked into our very grand hotel the Fort Rajwada, after some repacking ready for tomorrow we crashed, too tired to have dinner. 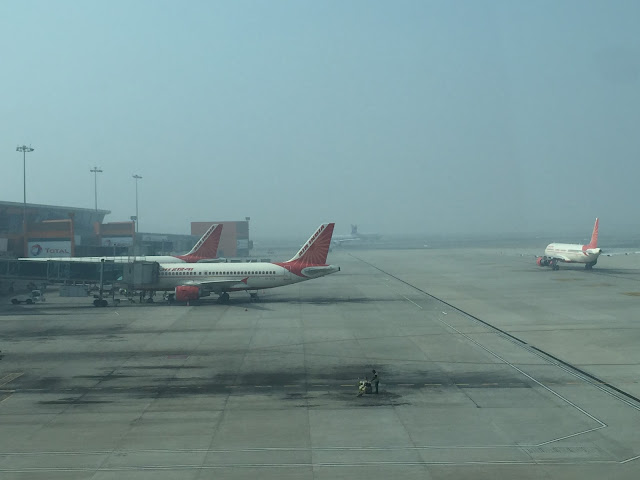